Norwich City fans were celebrating tonight after their club plunged into the relegation zone for the first time this season.

All the hard work on the training pitch is finally paying off, and the Canaries are now confident they can go on a long losing run in order to guarantee their drop back to the Championship.

Club owner Delia Smith is determined to get relegated so the team can start winning matches again, and she shrieked with delight when Newcastle scored a late winner at Tottenham to climb above Norwich in the table, leaving the Norfolk side in the bottom three.

They have been falling down the Premier League like a stone since a bright start to the campaign raised fears they might actually stay up. 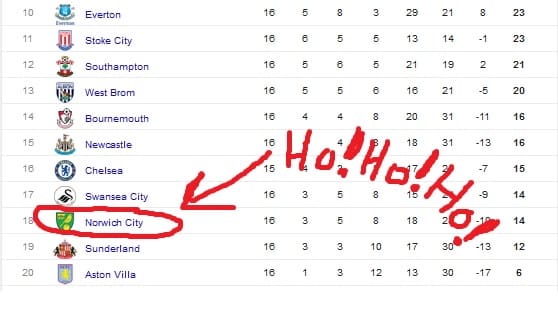 A Norwich spokesman said: “We owe Newcastle a massive beer. No matter how hard we have tried in recent weeks, we just have not managed to get into the drop zone. Now, thanks to the Toon Army’s recent good form, we have finally made it.

“Our manager Alex Neil is delighted, and has given the players three days off as a thank you for their efforts.

“We’ve all now got to stick together and ensure we don’t get out of the bottom three before May.”

Meanwhile, Norwich’s more illustrious East Anglian neighbour, Ipswich Town, moved into the promotion play-off places at the weekend following a hard-fought win at MK Dons – the club’s third away victory on the trot.