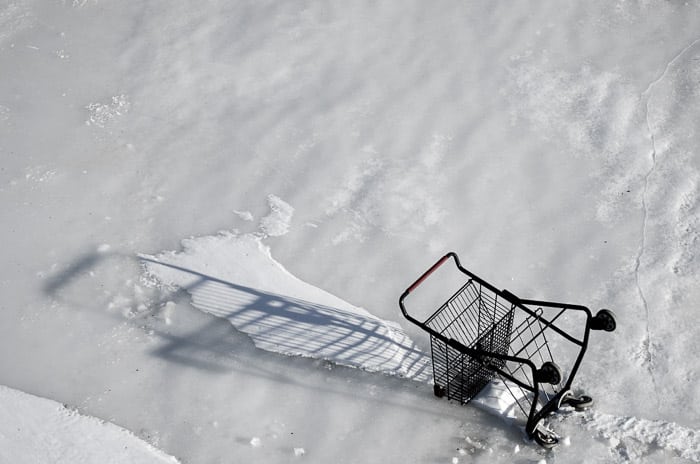 They have been dumped in hedges, canals and gardens across the country – now a supermarket trolley has been found abandoned at the NORTH POLE.

The Lidl trolley is believed to have been stuck in the polar ice and snow for four years.

But mystery surrounds how a lazy shopper got to dump the trolley at the North Pole because he or she was too lazy to take it back to the store.

The trolley, which has begun to sink slowly “nose-first” into the ice, now has the undisputed record for being dumped the furthest away from its shop.

Lidl says the trolley has been identified as originating from its store in Stowmarket, Suffolk and have demanded its return.

It was found at the North Pole by a team of polar explorers from Estonia, who contacted Lidl about their extraordinary find.

“We understand it is about 2,680 miles from Stowmarket to the North Pole, so this trolley has had quite a journey,” expedition leader Aleksander Salumäe said.

“We know people are lazy and can’t be bothered to return trolleys to the supermarket, but this was extraordinary.”

Mr Salumäe, 31, said his team only spotted the trolley because a fearsome polar bear was sniffing around it.

“We had to keep an eye on the bear because it looked hungry and we did not want to become its breakfast.

“Then we spotted the trolley! We hid behind an igloo and waited for the bear to go, then went to have a look. It had the Lidl logo on the bar, so we contacted their headquarters.”

Lidl bosses used the code stamped on the trolley to identify it as originating from the Suffolk store.

Spokesperson Lorraine Fisher, 34, said: “We urge all our customers to return trolleys to our stores once they have finished unloading them.

“We have had them turn up in strange places before, but the North Pole is definitely the strangest.”

Get your Suffolk Gazette mugs here, perfect for Christmas gifts. Buy below or from our sister site, Dirty Old Goat mugs…