America bringing the NFL to Suffolk

Claiming that British counties need to embrace “cool” sports, America’s National Football League (NFL) is bringing the sport to football teams in Suffolk. In a bid to replace football, American football will now be played in local stadiums.

This is all in a bid to spread what they call “true football” throughout the UK. Suffolk is only the beginning of a quest for American football supremacy.

The task has already been started, with a range of ways to watch NFL games outside the USA. But the real challenge will be getting it into schools.

“We’re hoping that by 2020, British people will just be calling American football ‘football’ and their version ‘soccer,’” said Roger Goodell, head of the NFL. “By 2022, we aim to make soccer obsolete. Men’s soccer at least. In America, soccer is a women’s sport.” 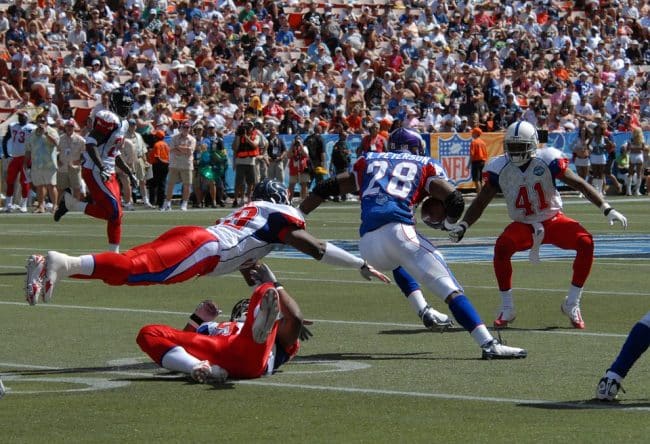 Meanwhile, reactions from locals range from perplexity to indifference.

“If our football team was winning the Premier League, I’d care,” said Peter Johnson, purportedly a fan of Norwich City. “As is, let the Americans have their fun.”

No one quite understands just how the NFL will work in Suffolk. Theorists suspect local soccer teams will start adding their sponsors to the official team name, playing friendlies against “real” NFL teams, and making their goalkeepers the most important players on the field.

Local rugby players are confused as to why the NFL has not approached them, choosing instead to focus on players who actually play the game with their feet, instead of those who already use their hands.

Many American NFL players, for their part, are hoping to join Suffolk’s budding NFL. They say that they’re tired of the nationalism inherent to every single aspect of American life.

“Sometimes you just wanna take a knee without the president getting on your back,” said Colin Kaepernick. “I mean, I love the US, but man do they hate me there. Even before the whole national anthem thing, they hated me for being African-American. I know that the UK embraces all cultures, and loves people from all around the world. That’s why they let foreigners in so easily.”

When asked whether he was worried about the effects Brexit would have on said acceptance of foreigners, Kaepernick asked, “What’s Brexit?”

Regarding the inherent differences between American and British football, American NFL players have few qualms about making it work.

When it was pointed out that British football is played with feet rather than hands, Brady just shrugged and said, “As long as the ball isn’t too hard, I don’t see what the trouble is.”