Concern at craze for pushing over cows

Young men are sneaking up on unsuspecting cows and pushing them over, leaving them laying on the ground and unable to get up.

The mad fad is believed to have started near Blythburgh in the north east of the county, but has now spread as far afield as Icklingham in the west.

One farmer, Giles Ruddy, who keeps a dairy herd near Hollesley, went to his field one morning last week to find all 50 of his cows had been pushed over by pranksters. 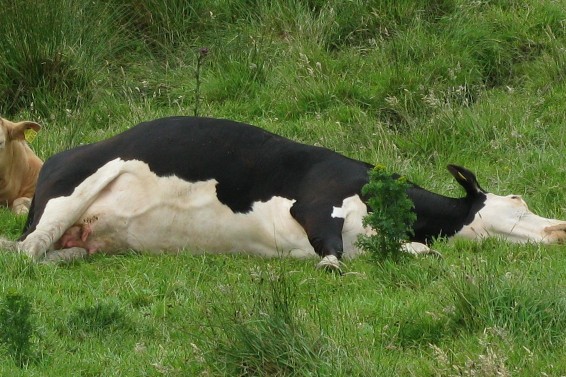 Creeping up on cows and pushing them over does not harm the animals, but vets believe they may become psychologically disturbed and no longer produce good quality milk.

Now farmers are calling on the police to increase rural patrols at pub closing time, when most of the cow-tipping incidents take place.

Mr Ruddy said: “It might be funny at the time, but pushing my cows over when they are least suspecting it is unfair as I have to go around picking them all up again. Police should be looking out for this sort of thing.”

Detective Inspector Frank Drebin, of Suffolk Police, said: “There is no actual law against pushing cows over. However, young men might well be committing trespass offences, and we would advise them to keep away from the farmers’ fields.

“There is also a dangerous element, in that a cow could fall on a person and squash them.”

One teenager from Melton, who refused to give his name, said: “There’s nothing for us to do round here. Pushing over cows is free entertainment, and it keeps us off the streets. And we think the cows quite enjoy it.”