Postmen in Suffolk are being ordered to wear roller skates in a bizarre efficiency drive by Royal Mail bosses.

Managers believe posties will deliver the mail much quicker if they are wearing the specially-adapted skates, meaning they can squeeze a second round in each day.

But the unions are furious at the trial, pointing out that wearing roller skates is a serious health and safety issue for their members.

Suffolk was chosen for the trial because it is relatively flat, but already there have been reports of two postmen zooming out of control down Bishop’s Hill in Ipswich at 40 miles per hour.

Thankfully no postmen have been hurt, and the Suffolk Gazette understands the trial is to be halted next week after mixed results.

A Royal Mail insider said: “The management dreamed up the idea after one of their children watched an episode of Postman Pat, in which Pat tried out some roller skates to get around faster.

“The kids show ended up as you’d expect – a disaster, with Pat flying headfirst over a gate into a field. Now pressure from the unions and postmen themselves is likely to force a rethink.

“Some of the younger posties were getting along okay with their skates, but the older ones were struggling, particularly when their bags were full early on their rounds.” 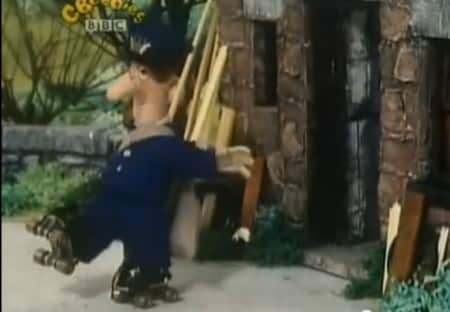 Postman Pat in skating difficulty
A spokesman for the Communication Worker’s Union said: “We have made it clear this is not progress. Furthermore, it is downright dangerous.

“We’re told the trial ends next week, and that rather than being extended nationally, it will be scrapped entirely.”

It is believed the postmen will be allowed to keep their skates when the trial finishes.

They had been given just two days training using the skates before being sent on their rounds.

One furious postie said: “I had people on my round laughing at me. They’d tap their watches and say, ‘You’re late this morning. Get yer skates on’.