Suffolk police have forced a Chinese restaurant to close following complaints about its lewd name and menu.

The Foo King restaurant only opened in Sudbury a month ago, but the town’s residents failed to take warmly to the owners’ food selection.

Police received a stream of complaints and were forced to raid the premises on Tuesday night. 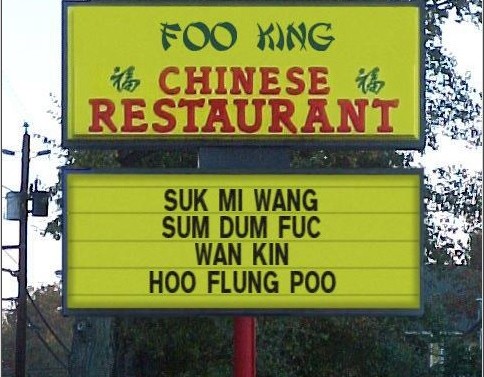 Owner Wai Hung Lo, 37, was arrested on suspicion of possessing offensive foodstuffs, and was released on bail pending further inquiries.

He was furious when contacted by the Suffolk Gazette, blaming ignorant locals for misinterpreting his Far Eastern delicacies such as Sum Dum Fuc, Hoo Flung Poo and Suk Mi Wang.

“We cook good traditional food from the Fah Flung province of China. It is quite uncommon for this food to be prepared here in England, so I am not surprised some people have not heard of many of the dishes before.

“But to read the names of the dishes and think we are being rude is very offensive to my country and traditions. Sudbury does not deserve us, and we will be looking to take our Suk Mi Wang speciality dish elsewhere.”