Suffolk man Mr Quincy Magoo was furious last night after being turned down for his annual car insurance renewal.

The 92-year-old from Woodbridge admits he suffers from nearsightedness, but insists he is still safe on the roads.

But when he asked his grandson to find him a new car insurance deal on some price comparison websites, all the companies turned him down.

“I’ve only had 112 bumps and shunts in my car this year, so that’s not even three a week,” Mr Magoo told the Suffolk Gazette.

“Nobody has ever been seriously hurt, so my eyesight really should not be an issue.” 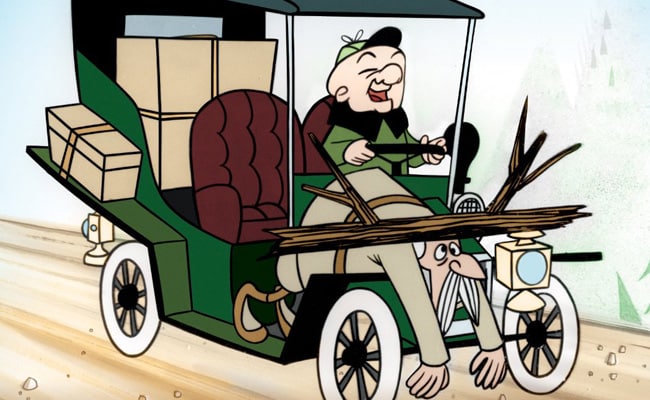 Liability: an artist’s impression of Mr Magoo in his car (pic, UPA)

Mr Magoo, who used to work in the film industry for United Productions of America studio in the US, retired to the UK after falling in love with a Suffolk woman whom he met during his national service days at an airbase.

Margaret Magoo, 90, was secretly thankful the car insurance renewal was rejected. “He’s a menace on the road,” she whispered. “Woodbridge will be much safer now, and we can always get a taxi.”

A spokesman for the British Car Insurance Trade Association said: “Quite clearly one of the conditions of getting car insurance is an ability to see. Mr Magoo unfortunately failed all medical checks, and even walked into the optician’s door when we sent him for an assessment.”

Please support my running costs by clicking here and buying me a beer!