Tensions between Suffolk and Norfolk have taken a worrying turn for the worse after a number of spies were exposed and run out of Ipswich pubs.

A double agent informed his Suffolk handlers that Norfolk’s Peasant Army had trained spies to infiltrate “the enemy” and monitor gossip in boozers south of the county border.

But when they tried to carry out their spying missions, the Norfolk spooks stuck out like a sore thumb.

A Suffolk Freedom Force intelligence officer told us: “The spies all had the same modus operandi: they sat at the corner of a bar on their own pretending to read a copy of the East Anglian Daily Times.

“We sent a dispatch to all our operatives urging them to investigate the watering holes in Ipswich, and before long they had identified five Norfolk spies in various establishments, including The Greyhound in Ipswich.

“Each imposter was run out of the pubs and was lucky to escape with his life.”

The increase in undercover missions is causing a growing diplomatic crisis between the neighbouring East Anglian counties, with full-blown military confrontation, not seen since the days of the great 1840 Norfolk Dumpling Famine, a realistic possibility.

There has been a build up of forces on both sides of the border in recent months, with the Suffolk Freedom Force moving a battalion of men, including the fearsome 2nd Pitchfork Infantry, to stations near Hoxne. 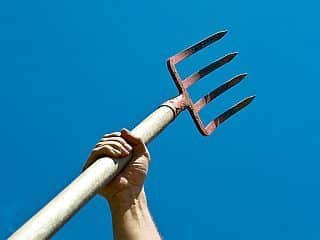 Pitchforks being waved in anger at Hoxne

Intelligence reports suggest the Norfolk Peasant Army is also preparing for war, moving the 6th Wooden Club Grenadiers and the 14th Donkey Cavalry down from Wells-next-the-Sea in the north of the county to the Scole area, near the border with Suffolk – and only five miles from Hoxne.

A local farmer told the Suffolk Gazette: “There’s quite a build up, and I’m seeing military manoeuvres every day. Clearly they are preparing for the worst. I have cleared out my cellar to use as a shelter just in case.”

And Stradbroke hardware store owner, Jack Daniels said: “We’ve been inundated with orders for pitchforks. Clearly something is about to kick-off.”

55,801FansLike
9,857FollowersFollow
October 16, 2015
Previous article
GPS was first invented in Suffolk
Next article
The art of being overtaken, constantly